Some from the Serbian government’ establishment „don’t like“ Russians, but „Russians are coming“- be ready to deal with it, or „turn your tail and run“… 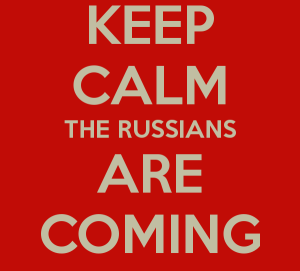 ***
@Darko Trifunović „Such idiot. How he can interfere in internal affairs of Serbia? Is that brotherhood approach of big Russian brother? I do not want Russian ambassador or any others to tell me what to do! Get out hand of Serbia!“(comment of Dr Darko Trifunovic (Secretary of Institute for „State security“ @ „Faculty of internal affairs“ in Belgrade) on Blic’ article: http://english.blic.rs/In-Focus/10057/Russian-ambassadors-threat-to-Serbia-NATO-red-line )  –
——————-

You, Mr. Trifunovic, as a secretary of an „strategic“ government institution, should know better then to use such profane language to describe an diplomatic official who comes from one of the friendliest country to Serbia. And nowadays there are not to many such Serbian friends, as the honorable Russian ambassador Mr. Aleksandr Chepurin…

If you have read carefully through the above Blic’ text, you would notice comment from your colleague Predrag Simic, who made remark that nothing is strange for Russia meddling into Serbian internal affairs, because until now South Africa (this is of course satiric comment) was the only country not to interfere into the „submissive to West, and politically castrated“, corrupted Serbian government.

You know to well, that since 2000 all important Serbian government’ decisions were done inside the walls of major Western embassies in Belgrade (beside Brussels and Washington).

As you stated that- you „do not want Russian ambassador or any others to tell me what to do! Get out hand of Serbia!“ – Now I expect from you nothing less, but to issue the same public warning to all Western ambassadors and EU envoys, that at present time openly meddling (and blackmailing our country) into Serbian internal affairs. Or maybe you are to afraid to do so, because at the end of the day, you are (in)directly on their payroll !?
———————-

To conclude this „replica“- In my personal belief: Russian’ concern with NATO taking militarily over country- where Russians are investing multimillion (in your favorite currency- dollars) projects, which will be for the benefits of, not only Russians, but for Serbian nation as well- is fully justified.

If we, as a nation and government wish to be honest in this relationship with Russia, we should at least remain militarily neutral (or, if we are forced to chose, than we have to side only with our historical, natural, cultural and proven „brotherly friends“… And such friends of Serbia, today certainly are not in the imperialistic West, but rather on the East – where they always used to be… 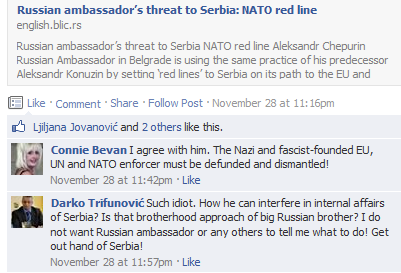